MY MOTHER’S KITCHEN AND HUE CUSINE

There is a Chinese story about a man who cried whenever he was served sweet leek soup (canh hẹ); it reminded him of his mother who used to cook that special soup for him. This might be a cliché, but thinking about the small, secondary kitchen on the ground level of my parents’ home leads me straight to my memories about my mother.

In that small, secondary kitchen on the ground floor, we had breakfast, lunch, and dinner, all cooked from scratch by my mother. The main kitchen itself was in an annex building connected to the main residence by a covered, tiled corridor about 20 meters long. My mother did not have any electric or gas range. She had only a raised floor of concrete where two open fires were made, pots and pans were put over a three legged support (kiềng) made of iron or a set of three bricks. Her maid had to keep the flames alive by blowing air on them intermittently, through a hollowed segment of bamboo tree (ống thổi lửa), or fanning them with a fan made from an areca palm frond (quạt mo cau). 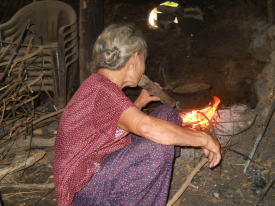 Rice was our staple. There were many kinds of rice. Its taste, consistency and even its aroma depended on its provenance. In the fifties, we still bought paddy (unhusked rice, lúa) from local farmers and had it decorticate by our domestics using a small manual grinding mill (cối xay). 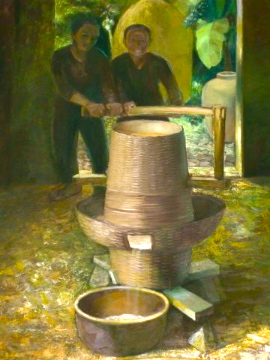 In fact, that kind of organic rice, which still kept a vitamin B rich outer layer of bran, was much more healthy than industrially processed rice that later became more and more popular. Gạo nàng hương and Gạo nàng thơm were very sought-after domestic products, brought from the plains of the Mekong River, in the Southern part of the country. Gạo Mỹ, imported American rice, although cheaper, was less well liked because its blandness. We occasionally ate yams (khoai lang) and different tubercles like củ sắn (cassava) or khoai tía (“purple yam”) that we grew in our own field in the back of our house. At harvest season, after my brothers dug the beds for the tubercles, we just boiled them and ate them without any added sugar but somehow, in their natural and fresh savor, they were so sweet and so appetizing. However, once in while, we also had a special treat of very sweet cassava or purple yam porridge (chè sắn, chè khoai tía.)

For breakfast, we usually had bland rice porridge (cháo trắng) or rice noodle (bún) eaten with nước mắm (fish sauce) or cá nục kho (scad fish cooked in fish sauce). My father liked to eat his porridge when it was still steaming hot. He seasoned it  with a fresh redpepper fruit just picked from the garden and crushed in fish sauce (ớt dằm nước mắm), to the surprise of his five-year-old grand son Hòa, who, born in Saigon, was able to notice it when we came to visit his grand father in Hue in 1978. Later, Hòa liked to recall this particular trait of my father’s eating habit, which was common in Hue area. 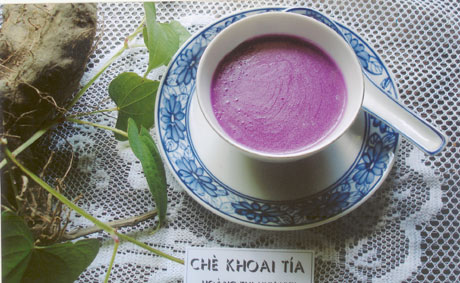 Unlike people in Danang or Saigon, we rarely use soy sauce in our diet, which was usually associated with Chinese cuisine.

We raised our poultry (chicken and duck) in our yard. Duck rice soup (cháo vịt) was a very simple and popular staple of our daily meal. During the hours long cooking process that made the rice grains splatter and bloom like small white Japanese lilac flowers (“bông thầu đâu”, “hoa soan”, or small snow flakes for that matter), ginger, pepper and mung bean helped alleviating the strong aroma of duck meat, which before serving was chopped in small pieces and dipped in pure strength ginger fish sauce (nước mắm gừng). However, my preferred dish was “thịt gà bóp rau răm” made of boiled and shredded chicken meat mixed with salt, pepper and ‘rau răm’ by squeezing them together. 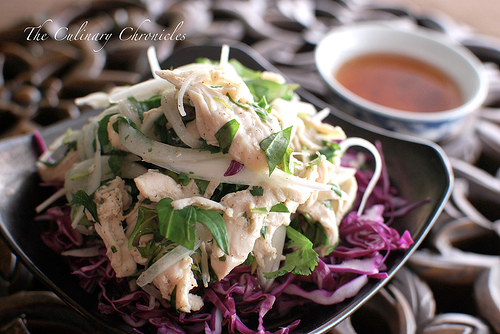 This was different from the way chicken was usually prepared in the North, where it was boiled, chopped into pieces then dipped in fish sauce. “Rau răm,” a pungent, long leave mint herb went also very well with embryonated eggs (trứng gà, trứng vịt lộn), (considered ‘taboo food” in Western countries, also called “baluts” in the Philippines where they are very popular). 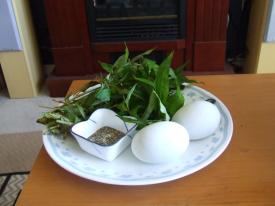 At night, street merchants kept the baluts hot in a basket of rice husks and announced their fare in a loud voice: “Ai ăn trứng lộn?” (Who wants to eat baluts?). They carried the basket on their head or at one end of a pole, while the other end was counterbalanced with bottles of ingredients, serving bowls, a basin of washing water and a kerosene lamp. The latter served to light their path as well as a “diagnostic” instrument to assess to degree of development of the duck or chicken inside the egg, to satisfy the different tastes of their clients.

The turkey was unknown to us. We had one or two pigs in a pen, which my mother and her maid fed with chopped slices of banana tree trunks, spoiled or left over food like rice (cơm siu /thiu), and bran (cám heo) bought from the rice mills. Pork usually was a special treat reserved for special occasions like New Year (Tết) or the celebration of the death anniversary of one of our ancestors. Fish merchants carried their fare in baskets hanging on both extremities of a bamboo pole, which rhythmically balanced on their shoulder as they went from house to house. I only remember a few dishes of fish that my mother made.

Canh cá was a kind of soup made of fish and a few condiments like hành ngò (onion and parsley), and eaten mixed with rice; most of the times it was cá giếc (crucian carp), a fresh water fish the size of a child’s hand. I was an art to eat those small carps because they had tiny bones, and we had to dissect their meat carefully with our chopsticks, lest we would choke on one of those bones. When this type of accident did happen, a popular remedy was to have the victim swallow whole, without chewing, a bolus of rice or of rau muống (a kind of water morning glory, very popular in Vietnam), in the hope that it would carry away the impacted bone down your stomach. Running the fingernails of a child born in the year of the tiger along the throat of the victim would also help, because the child was believed to have the spirit of the tiger, which, like cats, is considered to be an antidote to fish bones. Recently, in an American movie (Prime), someone wonders why carps are never on the menu of restaurants in this country. My Vietnamese-born son Hiệp, who apparently has an answer for everything, explained to me that with a fork and a knife, westerners would not be able to deal with all the bones of a carp. Is it interesting how your eating instruments determine the food you eat?

Another dish was cá kho, fish stewed in nước mắm and brown sugar; it might be cá kho khô (stewed until dried) or kho nước (still left with its delicious sauce) which I preferred. Most cá kho was made of cá nục, a kind of salt-water fish that lacked the delicate taste and texture of cá giếc, but was cheaper and easier to eat. Those dishes that my mother cooked were much simpler than restaurant food that, much later in life, I had the chance to taste in Saigon and later in America. Their simplicity and its lack of high-calorie components were characteristics of Hue’s cuisine. 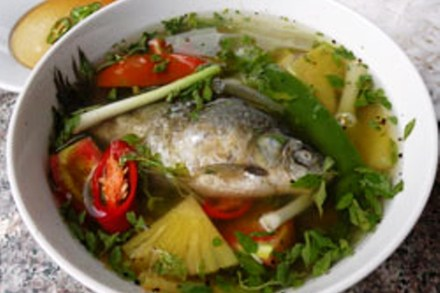 Another dish that my mother prepared on special occasions was bún bò or Hue’s rice beef noodle soup. During my wife’s short visit in 1973, my mother managed to teach her how to cook that special treat of Central Vietnamese cuisine. My wife is from the South and I am delighted that she inherited something from my mother’s culinary heritage. Bún bò Huế later became a favorite among my children too. My youngest son, though born in America, is very fond of bún bò and eats it my father’s way, very hot. My wife also taught a young Amerasian how to make bún bò. Raised in penury after 1975 in the South of Vietnam after the arrival of the communists, she had never tasted rice beef noodle soup (then a delicacy under a proletarian regime) before. She was so foreign and adverse to Huế culture in such a curious way that she fainted when exposed to a Huế dialect-speaking crowd. She is now the owner of a prosperous restaurant famous for its bún bò.

About my mother, I also remember the days preceding Tết, the Vietnamese New Year Festival, when I helped her make bánh tét, special foot long rice cakes, wrapped in banana leaves and containing green beans, pork and bacon at their core. They were tied tightly in thin ribbons of bamboo wood (sợi lạt or bamboo tape). 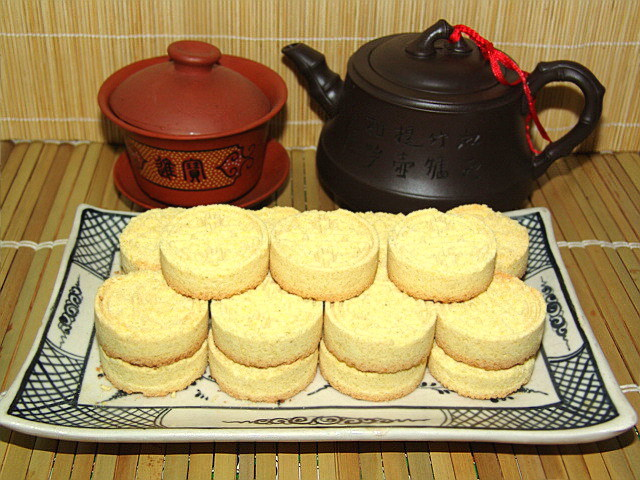 We had to boil them a whole day, in large tin cans that formerly were containers of petrol intended as fuel for cooking stoves (thùng dầu hỏa). We also made “bánh in”, cookies of sweetened, compressed glutinous rice powder, wrapped in colorful transparent wrapping paper (giấy dầu trong). They would be dedicated to our ancestors on their altar or served to our guests during the first three days of the New Year. 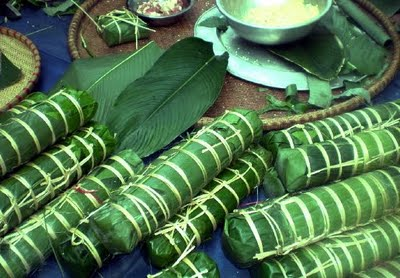 Fig: Banh Tet in green leaves with cylinder shape after being wrapped