"You've offered to walk into the minefield of hate..." 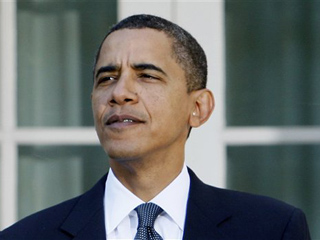 Here is film-maker Michael Moore's letter to President Obama, congratulating him on winning the Nobel Peace Prize and also reminding him of the size of the job ahead. I appreciate his last line:
"...The whole world is depending on the U.S. -- and you -- to literally save this planet. Let's not let them down."

Moore's tone is respectful and his vision is clear. If you don't read anything else, read the PS at the bottom.

How outstanding that you've been recognized today as a man of peace. Your swift, early pronouncements -- you will close Guantanamo, you will bring the troops home from Iraq, you want a nuclear weapon-free world, you admitted to the Iranians that we overthrew their democratically-elected president in 1953, you made that great speech to the Islamic world in Cairo, you've eliminated that useless term "The War on Terror," you've put an end to torture -- these have all made us and the rest of the world feel a bit more safe considering the disaster of the past eight years. In eight months you have done an about face and taken this country in a much more sane direction.

The irony that you have been awarded this prize on the 2nd day of the ninth year of our War in Afghanistan is not lost on anyone. You are truly at a crossroads now. You can listen to the generals and expand the war (only to result in a far-too-predictable defeat) or you can declare Bush's Wars over, and bring all the troops home. Now. That's what a true man of peace would do.

There is nothing wrong with you doing what the last guy failed to do -- capture the man or men responsible for the mass murder of 3,000 people on 9/11. BUT YOU CANNOT DO THAT WITH TANKS AND TROOPS. You are pursuing a criminal, not an army. You do not use a stick of dynamite to get rid of a mouse.

The Taliban is another matter. That is a problem for the people of Afghanistan to resolve -- just as we did in 1776, the French did in 1789, the Cubans did in 1959, the Nicaraguans did in 1979 and the people of East Berlin did in 1989. One thing is certain through all revolutions by people who wish to be free -- they ultimately have to bring about that freedom themselves. Others can be supportive, but freedom can not be delivered from the front seat of someone else's Humvee.

You have to end our involvement in Afghanistan now. If you don't, you'll have no choice but to return the prize to Oslo.

P.S. Your opposition has spent the morning attacking you for bringing such good will to this country. Why do they hate America so much? I get the feeling that if you found the cure for cancer this afternoon they'd be denouncing you for destroying free enterprise because cancer centers would have to close. There are those who say you've done nothing yet to deserve this award. As far as I'm concerned, the very fact that you've offered to walk into the minefield of hate and try to undo the irreparable damage the last president did is not only appreciated by me and millions of others, it is also an act of true bravery. That's why you got the prize. The whole world is depending on the U.S. -- and you -- to literally save this planet. Let's not let them down.